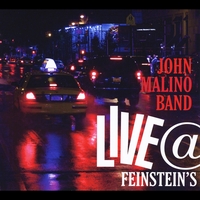 When he returns to the Feinstein’s stage on Wednesday with his band, John Malino will be taking the next step on an already complex professional journey that begins with rock music and moves on to jazz clubs and, finally, top-level cabaret.

“Feinstein’s is the fanciest, poshest of rooms, so it’s a rarified environment,” he says. “In spite of the fact that it’s so upscale, it’s like a family atmosphere.” Of course, each venue has its own vibe, but Feinstein’s is distinct from any other room that specializes in jazz, he says. “It’s really intimate…It’s more of a concert setting than, say, at Birdland, where there’s a lot going on”—not that this is necessarily a bad thing, he adds quickly. “I’m very comfortable with a lot going on. It’s almost a more focused show. There’s not a lot of chatter or clinking during the shows. It’s nice. It’s an absolutely full concentration. Usually, at a show or concert anywhere else, you might get 60 percent concentration. People are talking and wandering around. In jazz clubs, they’re eating.”

With a more focused audience, which Malino calls “challenging and rewarding,” a performer has to adjust his performance style: “Jazz rooms are a little looser, so I might not have a set list. Feinstein’s is a very high class cabaret room, so people may expect—do expect—more. You can play jazz, but it has to have a theme. At Feinstein’s, I work with a set list, and I rarely do that otherwise. I haven’t liked working with a set list until we started working at Feinstein’s, and then I felt it was necessary.” Since the John Malino Band (Malino on vocals and guitar, Carlton Holmes on piano, Melissa Slocum on bass and David Gibson on drums) has been playing together for years, they have a strong repertoire and can choose songs on the spur of the moment. “A lot of times it’s fun—depending on what’s happening in the room—to pick the songs on the fly. That’s been my MO. But at Feinstein’s, I have to polish it a little.”

The length of the set also demands careful selection of the songs. “They’re short shows—1:10, 1:15, tops. It’s just one set, so you have to say what you want to say and think it through as a whole set. In a jazz club, you get three sets and you have all night to ramble through the songs of your fancy.”

The set list, he adds, can include a wide variety of songs (although as of the interview time, none was definite for the Feinstein’s performance). Malino cites classic jazz groups like Lambert, Hendricks and Ross (Dave Lambert, Jon Hendricks and Annie Ross) as inspiration for some of their selections…but Johnny Cash songs can also work their way into the show, as well as standards like It Don’t Mean a Thing, Let’s Do It, Route 66, Come Rain or Come Shine, Let the Good Times Roll and Sway.

John Malino began his music career as a rock singer, picking up his first guitar at nine years old. When he got older, he and some friends formed a rock band that played venues like CBGB. But, he says, his baritone voice made singing rock music a challenge. “I’m in an Iggy Pop range,” he quips, “but I wanted to be Paul McCartney.” But his voice was perfect for jazz and he soon found a way to make his own sound that blends the two forms of music. “You can take the boy out of rock ’n’ roll,” he laughs, and then considers how he would define his style of music: “Anything that leans towards the blues is my area,” he muses. “It’s more about taking jazz songs and making them rocky.”